When the original Star Trek television series was filmed in the mid 60s, there was a scene, in which, Captain Kirk, a white man, had to kiss Lieutenant Uhura, a black woman. Showing an interracial open-mouthed kiss on screen at that time was controversial, and the directors and producers did everything they could to avoid it.
They shot the scene from various angles where the kiss would be implied and the lips wouldn’t actually have to touch. But William Shatner, the actor who played Captain Kirk, made funny faces in every weirdly angled shot – except the actual kiss, forcing it to become the only shot that could be used.

“I think this is such a fantastic story that speaks of the legacy of constraints on the way that relationships have been shown on television,” says Dr. Sarah Kleeb, a professor of media studies at the University of Toronto.

In many ways we’ve moved past such typical portrayals, but we’re still not completely open to variations of romance on the screen Kleeb says.

Jim Slotek has been a TV and movie critic for the Toronto Sun for more than 30 years, and, says there is a huge disparity in where we are and where we should be when it comes to how love and relationships are depicted on screen.

“There are still a lot of tropes and clichés that Hollywood tends to lean on,” Slotek says.

The romantic comedy, in particular, incites the most criticism when it comes to the modern portrayal of love.

For instance, she says, if a straight man and a straight woman are main characters, 99 percent of the time, they’re going to end up in a relationship.

“That is grossly unrealistic,” Kleeb says. “It undercuts the ability of platonic friendships between men and women and it just continues to essentialize those relationships.”

Slotek says that if you think about movies like the ones Katherine Heigl is in such as 27 Dresses and Life as We Know it, you’ll notice the repetitive approach these movies still have. 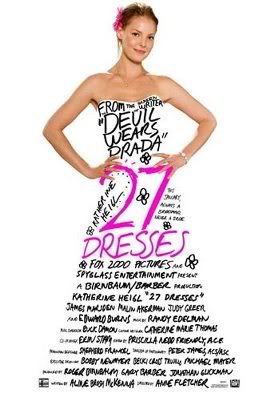 “They [the romantic leads] always hate each other when they meet, and then they realize they love each other, and one decides to take a job in another city, and the other races to the airport to yell at the gate,” Slotek says.

Large-scale romantic movies are clinging to tried and tested ways to avoid risk and guarantee a profit Kleeb says, and it seems like they’re completely alright with the fact that their growth can almost be described as stunted.

“There are much more rigid depictions of what a relationship is, how it forms, between whom it forms and how it is expressed in films as opposed to TV,” Kleeb says.

Realistically speaking, expressions of love should change on screen in the same way that they do in life, especially when you take into account the intense speed at which relationships are now evolving.

These changes are far more evident on TV than they are in movies says Kleeb.

“As television has become more and more specialized and a more customizable experience than major motion pictures, I think it is blowing Hollywood right out of the water in its depiction of the complexities of relationships,” Kleeb says.

Kiva Reardon, a film programmer at TIFF and film writer, says TV shows are doing a much better job than the big screen of showcasing the different kinds of love and relationships that exist.

“Will and Grace invented the trope of the sassy gay friend but also focused on his dating life as a gay man,” Reardon says.

By showing the different facets of relationships that exist in real life, it paved the way for other shows like Modern Family.

Just the title of the show, Modern Family, plays with the idea that relationships and family structures shouldn’t be portrayed in a singular way.

Cam and Mitch, for example, are a happily married gay couple raising a child together on the show.

“It’s not so much about their gay characters, it’s more just shown as another relationship in the family,” Slotek says.

While this isn’t an atypical relationship in life, it’s just one of the atypical relationships on the show. Gloria, a beautiful and feisty young Latina woman, is married to a much older and wealthier white man named Jay and would normally be depicted as a gold-digging, trophy wife, but instead the show plays with the viewers’ preconceived notions.

“The trophy-wife character could be played in a really typical way with of her just being demure and not fighting back, and instead they cast it in this way that she’s super-loud, she’s full of life and the couple are actually in love with each other. I think it’s interesting that they use those gender stereotypes but subvert them slightly.”

Even a show that is doing a good job of portraying a variety of potential family structures still has traces of clichés.
As naturally as Cam and Mitch’s relationship has been portrayed, Kleeb says that there are still “little bits of stereotypical coding” where one male is more obviously stereotypically feminine and the other is more stereotypically masculine.

While introducing and sustaining a narrative such as this is a hugely significant step forward, Kleeb says “there’s always room for more nuance, more improvement, and more inclusion.”

Whether it’s the creators who are responsible for this shift (and this stagnancy), or the audience, it’s hard to say. Slotek describes it as “the chicken or the egg,” and Kleeb says the two “feed into each other.”

“You kind of have to hold those two things in tension, that applause for the things that are taking place with the critique of the things that need to keep moving forward,” Kleeb says.

Reflecting on the positive changes we’ve made is important she says, but there’s always room to take something out of it’s exceptional moment and just make it what it is in real life, which is people being people every day.

Slotek also thinks there’s still quite a distance to go.

“When TV and movies look like us, look like the United States and Canada with the same proportions of people and relationships of all kinds, then we’ll have arrived,” he says.